One of the cool features of iOS 8/9 is that if your device is plugged in, you can invoke Siri hands-free by saying "Hey Siri".  You can wake up and get the weather without getting out of bed!

But I felt like an idiot when I tried if for the first time and repeated "Hey Siri's" fell on deaf ears.  So much for impressing the wife.

Duh.  The "Hey Siri" feature has to be configured; it's not turned on by default.

Go into Settings->General->Siri.  Then turn on Hey Siri: 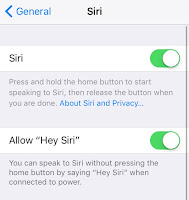 You then go through a few screens so Siri learns your voice and you're good. Yep.  Works a little better﻿ if you turn it on... 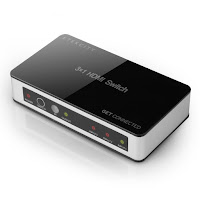 As described in a prior post, my HDMI Switch was incompatible with the new Apple TV 4. I had to directly connect my TV's HDMI cable to Apple TV before everything worked. As a result, if I wanted to switch from Apple TV to playing a Blu-Ray movie, I had to manually swich/replug the cable. Not good!

Why was my HDMI Switcher, which had worked fine with Apple TV 3, a total fail with Apple TV 4? Researching this, I discovered the HDCP specification has evolved, the current version being HDCP 1.4. I suspected Apple TV 4, a brand-new device, might not play nice with devices not HDCP 1.4 compatible.

Using an excellent HDMI Switch comparison I found, I purchased the Etekcity 3x1 HDMI Switch from Amazon, one of the few that was specifically noted as supporting HDCP 1.4.

Crossing my fingers, I set up the new Etekcity switch, turned on Apple TV, and...yes! It worked! I had found a compatible HDMI Switch for the picky Apple TV 4. As before, I could now switch between Apple TV and the Blu-Ray player instantly from across the room -- no more messing with cables!

Still, I'm upset with Apple. HDMI devices should be downwardly compatible; i.e. they should be smart enough to adjust and communicate with earlier devices. For whatever reason Apple chose not to do this.

So in addition to paying for a new version of Apple TV, many of us will also have to buy a new HDMI Switch. This adds 15 to 20% more to the cost. Thank you Apple.