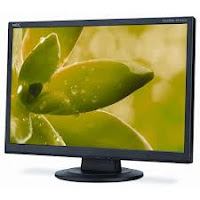 Your iPhone, iPad or iPod Touch is great for on-the-go computing, and the screen size is fine for your needs. But be honest - aren't there times when you gaze longingly at your giant desktop monitor, and think "what if"? Wouldn't it be great to take your tiny iPhone display and put it up on the big screen?

This is not a wild and crazy idea. It is doable - with a simple accessory for your iPad, iPhone or iPod Touch iOS device. I am creating this post now using the Notes App displayed on my Dell 24" monitor, and I am loving it more by the minute!

Why an external display?
Here are a few reasons people might want to display their iOS device on a PC or Mac Monitor:


How to show your iOS display on your large monitor
All you need is a compatible VGA adaptor for your iPad or iOS device to make this work. No special software, apps, etc.  Brilliant!  With the adaptor, here's how it works:


If you have an iOS device with the new Lightning connector (like the iPhone 5) you need a different adapter, the Apple Lightning VGA Adapter.

If you are unsure which adapter your iOS device needs, use this Apple summary of the correct VGA adapter for various iOS devices.

Testing - some limitations
The iPad 3 works great with the 30-pin VGA Adapter.  However, if you have lightning connector devices, and want to use the lightning to 30-pin Apple converter, my testing shows this combination does not work for monitor displays.

I tested the following:

Also tested was the iPod Touch 4th Generation=>>30-pin VGA Adapter=>VGA Display combination.  Apple's documentation says this works for "video out" but not "video mirroring". My testing shows this to work, albeit with the stated limitation. Unlike my iPad 3, plugging in the fourth generation iPod Touch, you will not see on the monitor what you see on the iPod. The home screen, apps, Internet will not be "mirrored" on your desktop display. However, "video out", i.e. streaming video, will show on the display. For example, YouTube videos from your fourth generation iPod touch will display on a large monitor.
Posted by Tech Guy at 10:11 PM