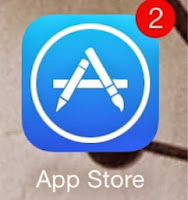 Auto update for apps was an iOS 7 feature I was much anticipating. The novelty of seeing those numbers in red circles above the App Store icon wore off really fast. Diligence in running updates hardly mattered, as the updates came so frequently that the dreaded red numbers were quickly back. It became like painting the Golden Gate Bridge - the job was never done.

Imagine my disappointment then when, the day after installing iOS 7, I was greeted with the familiar Red Circle Number above the App Store! Sure enough, updates were waiting to be installed. How could this be?

Turns out there is a simple explanation. The App Store auto update feature is definitely part of iOS7, as advertised. What isn't advertised is, by default, auto-updating is turned OFF. Until you turn it on, you remain in manual update mode.

Once you know this turning on app auto updates is easy. 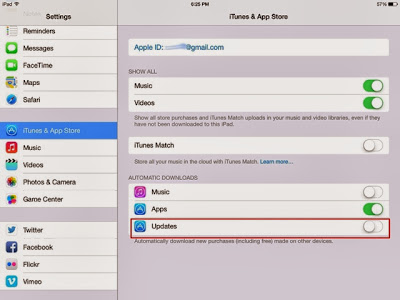 1. Go into the Settings app. Tap on iTunes & App Store. Look for the Automatic Downloads section, where you can find the Updates setting. As in the screen shot, note it is set to OFF (white). 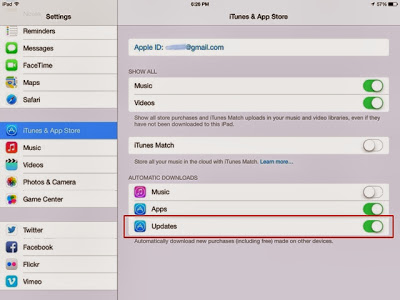 2. Tap the Update setting so it goes to ON (green). Auto-updating is now on and begins immediately.
When I exited Settings and looked again at the App Store icon the dreaded Red Numbers were no more - yay! 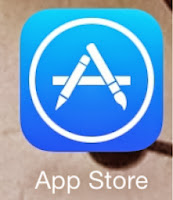 Although my iPad was good for auto-updating now, I question Apple's decision on this one. How many thousands of users will remain in manual update mode by default?

I like the idea of choice, letting you turn off auto updates if desired, but auto updates should be turned on by default as the setting that would best serve the vast majority of users.