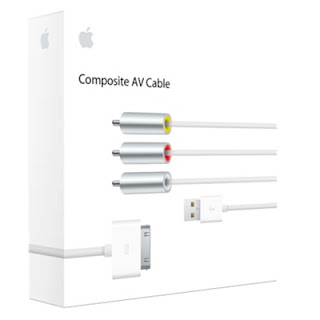 I am on a mission to find the best way to stream iPad content to my old TV.  The "old" part is the challenge: I currently own a 27" Sony Trinitron.  There are a lot of sexy new ways, such as Apple TV, to display content on new HD TVs.  But how to display iPad and other iOS content on an older TV, not blessed with HDMI connections?

The type of connector used by your iOS device is in fact critical.  If you have a newer iOS device with the Lightning Connector (e.g. iPhone 5, iPad 4, iPod touch 5th-generation) you cannot use the Composite AV Cable. You might think you could get the  lightning-to-30-pin cable and connect that to the Composite AV Cable. But no.  My testing has shown the  lightning-to-30-pin cable does not support video, as Apple also states on its site.  (Later I'll discuss a possible option for newer iOS lightning devices.)

The Composite AV Cable has the standard set of three AV /RCA cables, colored yellow, red and white. For older TVs, this is often your only option for video and audio in (yellow = video; red/white = stereo audio).  The cable is conveniently long, about 6 feet, and in addition to the three AV cables includes a fourth USB cable, which can be used to power your iPad during use.

From prior experience connecting a laptop PC to my television with an RCA composite cable, I expected to plug the cables into the television, plug the 30 pin connector to my iPad, turn both on and have my iPad screen display on the TV. This is known as "video mirroring".   This is not, repeat not, what you get with the Composite AV Cable.

Instead, I plugged everything in, turned on the iPad 3 and the TV, and got...nothing. All I saw was a blank, grey screen, and I tried this on two TVs just to make sure. I was getting audio, but nothing else. I tried running some apps, Safari, etc. - nothing. It looked like I had a defective video cable.

Luckily, before returning the cable, I decided to try the Netflix app. Lo and behold, up came the familiar red Netflix starting screen, both on my iPad and on the TV! At least at that point I knew the video cable wasn't defective. However, confusingly, on my iPad the red start screen disappeared and went into the normal list of available shows on the app, but this isn't what was on the TV screen. The TV screen continued to only show the red Netflix start screen! What was going on here?

So I selected a Netflix show in the app and started to play it. Immediately, the iPad screen reverted to the Netflix logo.  However, simultaneously, the video streaming began displaying on the TV, and only on the TV.  Not exactly what I was expecting, but hey, streaming was "working".

Well, not optimal, but at least I knew the score. All I needed to do would be to round up all the various streaming possibilities, Safari or in-app, and I should be good!

Ah, if only it was that easy. It seems whether an app or a website can stream to the TV (at least through the Composite AV Cable) is up to the whim of the developer. Some stream fine, some don't stream at all, and some stream in Safari but not in the app (or vice versa). The variability and unpredictability is frustrating - it's all so Android-like.

Aside from streaming, not much else will display on your TV. The Apple Photos app will display in slideshow mode, but I tried several prominent game apps without success.

I did not try everything, but below is a summary of my testing with the Apple Composite AV Cable. I expect consistency in the iOS world; it would behoove Apple, which has to sanction all apps, to insist on streaming apps to have TV-out capability.

Also, I have discovered how to get Apple TV to work on older TVs without an HDMI connection.