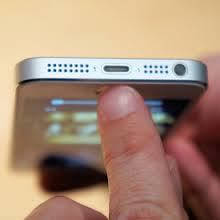 I recently ran into a serious problem with my iPod touch: it would not charge. IPhone owners have had similar problems. However, before you make that trip to the Apple Store, or worse, give up and order a new device, maybe the simple solution that worked for me will also help you.

I first noticed the problem when I had plugged in my iPod touch to charge it overnight. In the morning, instead of being all charged up, it was dead as a door nail. I tried replugging it again, nothing. But when I plugged it into the USB port of my laptop it charged okay. I thought maybe the electric socket or the charging plug was bad.

But next time I had to recharge the problem was still there, only this time the USB charging option did not work. I tried swapping out the lightning cable with the one from my iPad, no change: the cable was okay. I tried using the iPad charging plug, still no charge. Went back to my original cable and plug, and tried different plugs in the house - finally it was able to charge.


But each charge was an adventure. Normally, you'd plug it in to charge, and there would instantly be a "ding" and a message that the device was charging. Sometimes, it wouldn't charge at the beginning, but then charge a little later.  Or, really weird, it would charge but periodically "ding" on and off throughout the charging cycle!
Okay, this problem was not going away, and if I couldn't solve it, in short order my iPod touch would be a cold brick.

Doing further research, it seemed this was not an uncommon problem for iPod touch and iPhone users. I tried a few things, but restarting or resetting my device did not help.

But here is what did work: I took a wooden toothpick and gently poked out all lint that had accumulated in the lightning charge port. Like many guys, I carry my device in my pocket, and over time, the exposed lightning port slot had accumulated a good amount of lint. I was surprised at the amount I was able to pull out of that tiny hole.

I then plugged in my lightning cable to begin a charge and instantly received the "ding" charge acknowledgment. My iPod touch was back to normal charging!

My very high-tech device was brought down by a very low-tech problem: lint! The lint was preventing a clean electrical connection: hence the varied symptoms I saw.

Interestingly, what works so good in the PC world, a compressed gas duster that blows air, did not do the trick. The lightning port is so small, and somewhat deep, that the lint gets really pressed down in there - even with the compressed air the lint remained. Only with the toothpick was I able to get it lint-free.

Of course, your mileage may vary, but lint removal is an easy thing to try to fix your iPod touch or iPhone charging problem.