After a while, it's not unusual for your iPad to start running out of space. Apps, especially those designed for the retina screen, can take a surprising amount of space. Periodically it makes sense to go through and remove those apps that you no longer use.

Space Management on Your iOS Device

Here are the simple steps to rein in bloated apps that are taking up space on your iPad, iPhone or iPod Touch.

1. This process all takes place in the Settings app, so tap to open it. 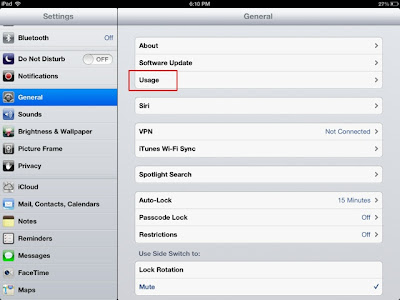 2. Tap on General and then Usage. 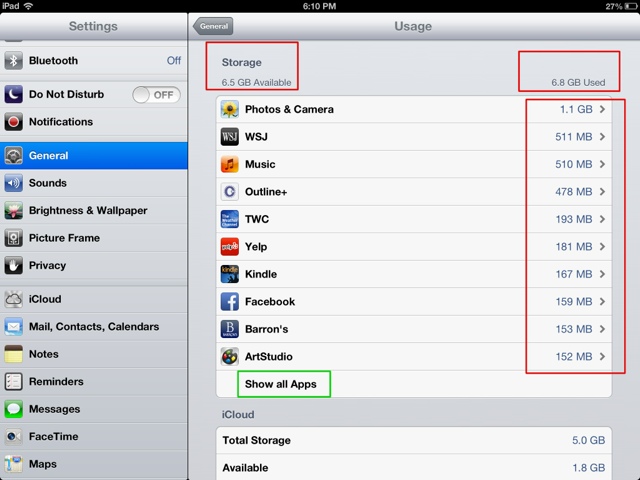 3. The Usage area gives you a wealth of information. Up top (highlighted in red) on the left it shows how much space is available in gigabytes (6.5 for me), and on the right how much space is being used (6.8 GB).

Then, what's really handy, is you can see the Top 10 apps in terms of space usage, usage being the size of the app and all data associated with it. For my iPad, the Photos app is #1 with all associated images taking up 1.1 GB.

Now I tap on "Show All Apps" (highlighted in green, at the bottom of the app list)  to see the rest of my apps. 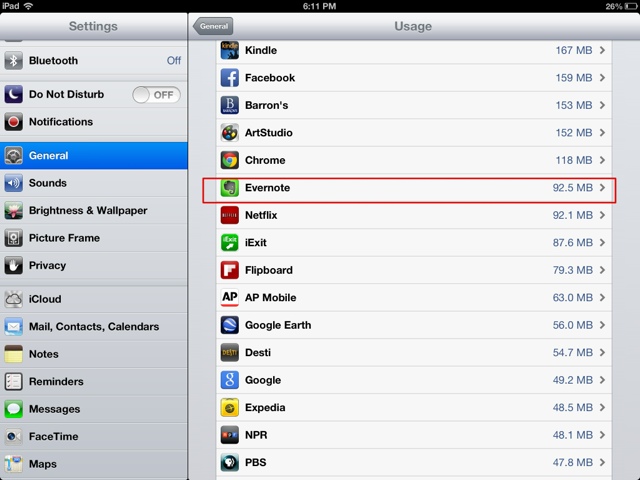 4. The list of apps continues in descending order by space used. I don't use Evernote as much since I discovered how to create folders in the Notes app. Since it's taking up 92.5 MB, I'm going to delete it, so I tap on its name in the list. 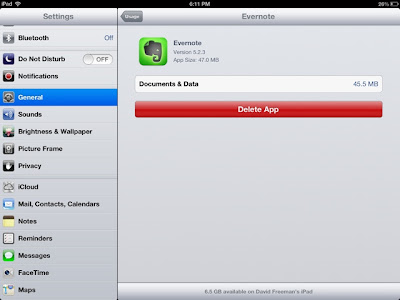 5. After tapping on the Evernote, a screen comes up with the option to delete it. Tap on Delete App. 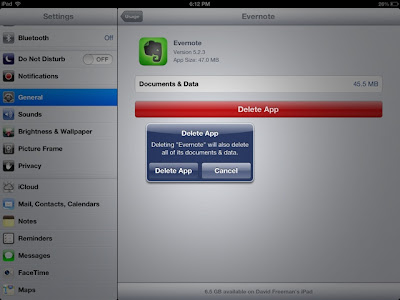 6. A useful confirmation window appears, reminding you that you will be deleting the app and its associated data. If you change your mind later, you can always download the app again from the App Store (and if it was a paid app, it knows you are still an "owner" and you will not have to pay again). But once deleted, your data is gone forever, and won't be restored by any subsequent re-downloads of the app. In this case, any notes I created with Evernote will be deleted with the app. Since there's nothing special I needed to save, I tap "Delete App" to delete the app and its data.

Finaly, if you don't need to see the space associated with a given app, there is a quicker way to delete apps.

Email ThisBlogThis!Share to TwitterShare to FacebookShare to Pinterest
Labels: Apps, Getting Started